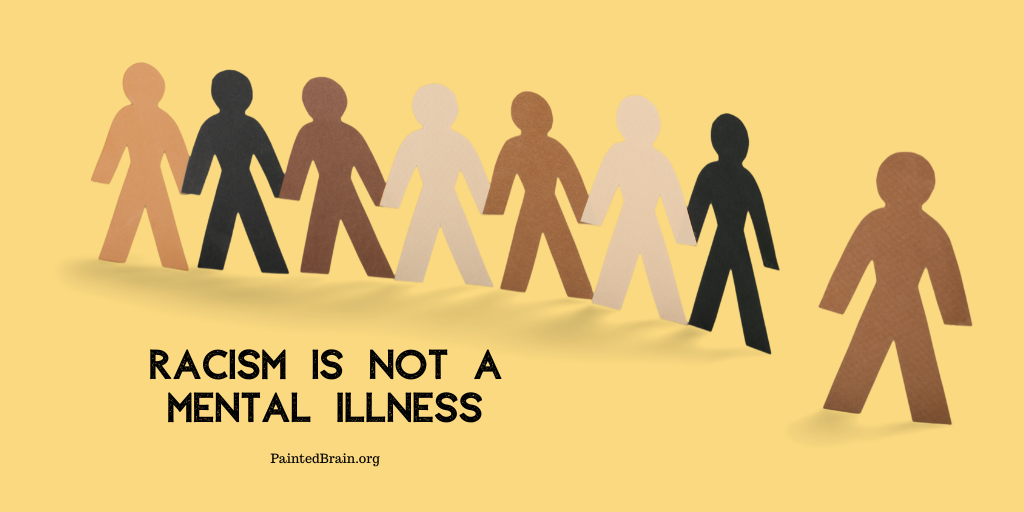 Racism is NOT a Mental Illness

Moral illness is doing or acting in a way that is intentionally and carelessly hurtful to others.

Mental illness is an unwanted mental experience that won’t go away simply because you want it to.

We’re human, constantly harming one another, even the well-intentioned and kindest among us.  When we aren’t hurting others we’re either hurting ourselves to avoid hurting others or living blissfully isolated from everyone else.  When we interact with others, we inevitably hurt them.

Fortunately, this is only one of the many things we do to and for each other as social creatures.  Being mentally healthy means recognizing our flaws and pettiness and the ways in which we fail to live up to our own expectations without becoming blocked or weighed down by the recognition.

“I am flawless, and if you are unable to see that, then I will force you to understand. See how many people believe as I do? You should, too. You can agree with me or get the hell out of my way.  We, the like-minded, are the perfect ones, and if it wasn’t for the others (you know who they are) things would run smoothly and we could all rest easy in our perfection.  It’s those others who stand in our way, trying to take what we have, so come on! Let’s unite against them!”

It disengages from the complexity of reality itself.

It’s accepting what you are told without questioning the source or intention or wisdom of the teller.

Racism is a mental failure, a copout, not an illness.

While mental illness is an unwanted mental experience that won’t go away simply because you want it to, racism is a choice to ignore the impact of your preconceived notions and retreat from the opportunity to engage with the wondrous complexity of the world around you.

Mental illness is not the same as moral illness.

Mental illness does not have a morality any more than cancer does.  People with mental illness can be harmful to other people.

So can people with cancer.

Moral illnesses cause more suffering in the world than mental illness.

Moral illness is acting out on our own fears, the fears we have about ourselves. It is to say:

“My life has no meaning, I don’t have any of the things I want or feel that I deserve, I feel hopeless and defeated and weak because of it, but if I put more thought and effort into my anger toward others, those I conveniently blame for my unsatisfied wants and desires, then I can spend less time with my own pain and absolve myself of the responsibility to change.”

The world is so complex, it boggles the mind.  Throughout human history, those in power enhance and strengthen their position by turning one group against another, shirking their responsibility as leaders to address the grievances of their subjects.

There were moments in American history when the ideals of an informed populace involved in the intelligent, complicated challenge of self-governance were moving toward reality.

Our definitive American decision that separate is not equal coincided with a period of tremendous economic growth and investment in infrastructure and education.  The American commitment to providing quality education to all has been slowly eroding ever since we decided that we all had an equal right to it.

The world has grown more complex as education has weakened, leaving millions susceptible to the temptation of settling for easy answers.  After all, it’s far easier to blame immigrants than to try to understand the subtle interplay between global economic forces, a hobbled welfare system, a dramatically shifting job market, and an education system barely attuned to any of this.

Mental illness is not a moral illness, it is only an illness.