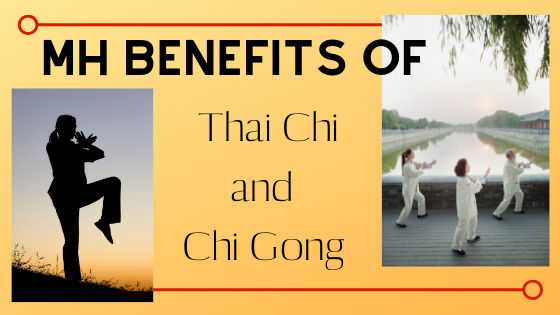 Both Tai Chi and Qigong involve sequences of flowing movements coupled with changes in mental focus, breathing, coordination, and relaxation. There is significant overlap between the 2 practices in terms of movements and in the shared focus on breathing and mindfulness. Both practices are low-impact, moderate-intensity aerobic exercises that are suitable for a diverse patient population with regards to gender, age, and health status.

Tai Chi and Qigong have been characterized as mind-body interventions and as “meditative movements.” They are relatively safe, nonpharmacologic practices, which can be used for treatment and prevention of psychosomatic disorders, with few adverse events reported in the literature.

Both Tai Chi and Qigong have been known to improve the qualities of life in many diverse patient populations. Whether someone is suffering from a chronic physical illness, to anxiety and depression, practising Tai Chi and Qiquong on a regular basis can greatly impact the quality of one’s physical and mental states of health. The following research by Ryan Abbott. MD and Helen Lavretsky, MD, was published in The Psychiatric clinics of North America, 36(1), 109–119. doi:10.1016/j.psc.2013.01.011.  They list all of the health outcomes of doing Tai Chi and Chi Quong, health-related quality of life-related to one’s physical and mental health, how practicing both of these exercises can reduce stress and minimize the effects of depression and anxiety.

Studies have shown that Tai Chi and Qigong may improve bone density, cardiopulmonary health, arthritis, fibromyalgia, tension headaches, and other medical conditions. Given the relationship between physical and mental health, general improvements in physical health or reductions of chronic disease symptoms may help to improve mental health. Chronic physical health problems are associated with stress, anxiety, depression, and poor mood.

Health-related quality of life (HRQOL) serves as a comprehensive measure of patient well-being, and it reflects patient perceptions of personal health and life satisfaction over a period of time. Individuals suffering from mental health conditions are particularly likely to report poor HRQOL. A study comparing patients with common medical disorders to those with mental health conditions found significant differences in HRQOL between the 2 groups. Individuals with mental health conditions had significantly greater impairment of HRQOL. The ability of Tai Chi and Qigong to improve HRQOL is an important consideration for treating patients with mental disorders. Although there is no evidence that Tai Chi and Qigong may be effective for a particular condition, they may still provide some benefit by improving HRQOL.

Tai Chi and Qigong as Exercise

Studies have tried to understand the effects of Tai Chi and Qigong as aerobic versus mindful exercise. Independent from any special benefits Tai Chi and Qigong may confer as meditative movements, they also benefit patients as general, low-impact, moderate-intensity aerobic exercise. There is extensive evidence of general exercise interventions with regards to mental disorders. Systematic reviews have found that exercise results in significant reductions in depression symptoms comparable to cognitive-behavioral therapy. Two studies found that exercise is comparable with sertraline (Zoloft) in terms of efficacy for the treatment of major depressive disorder. In studies comparing the benefits of Tai Chi and Qigong with general exercise, both interventions have been shown to have comparable effects at reducing anxiety. In general, evidence from clinical trials supports a positive association between physical activity and physical and psychological health.

The most logical clinical application of mind-body techniques is for stress reduction. Out of 5 RCTs, 4 found a significant association between Tai Chi and Qigong and positive effects on stress.

An RCT66 found no significant impact of Tai Chi on mood. That trial randomized 22 community-dwelling participants (mean age 68 years) with lower extremity osteoarthritis to 12 weeks of twice-weekly, 1-hour-long Tai Chi sessions or to a control group. Tai Chi was found to improve pain, physical function, and other arthritis symptoms (measured using the Arthritis Self-Efficacy Scale) as well as satisfaction with general health status, but it did not result in a statistically significant difference in mood.

Ten RCTs have investigated the effects of Tai Chi on anxiety, 9 of which showed significant positive effects.

Fourteen RCTs have evaluated the effects of Tai Chi and Qigong on depressive symptoms, 13 of which found positive results. Several of these RCTs have already been described.67

Most of these studies were conducted in patient populations without known mental disorders. Only 2 studies involved participants with clinically diagnosed depression.72 A review in 200974 of Tai Chi and Qigong in older adults found 36 clinical trials with 3799 participants and concluded that Tai Chi and Qigong practice causes a significant improvement in depression and anxiety. Tai Chi has been particularly recommended as a first-line treatment of mild depression in geriatric populations given its known benefits in improving balance and reducing falls.75 Depression and falls are associated through a complex bidirectional relationship.76Antidepressant use has also been associated with falls,77 especially selective serotonin reuptake inhibitors, which are associated with fragility fractures to a higher degree than other classes of psychotropic medications.78,79

On the other hand, more recent research has produced mixed results on the effectiveness of Tai Chi and Qigong for the prevention of falls. One Cochrane collaboration meta-analysis80 found that Tai Chi had a moderate effect on reducing falls in community-based geriatric populations, and a second meta-analysis81found insufficient evidence to support the use of Tai Chi for prevention of falls. One of the most recent RCTs of Tai Chi as a community-based falls prevention intervention was an 11-site multicenter study conducted in New Zealand.82 A total of 684 community-residing older adults with at least 1 risk factor for falls were randomized to receive 20 weeks of either Tai Chi once a week, Tai Chi twice a week, or general exercise once a week. All groups experienced a reduction in the rate of falls; however, there was no statistically significant difference between groups over the 17-month follow-up period.

Tai Chi and Qigong may also be able to improve sleep quality, with the corresponding impact on mental health.

Painted Brain3 hours ago
"One of the benefits of tech training is that it provides an outlet for meaningful engagement. The old argument that too often smartphones and Facebook becomes a crutch for real social interaction, this is entirely different for someone who is already isolated and needs to connect with people outside of his home. If you already have a good social circle of support, there is no reason to use social media in excess. For someone starved of social interaction, it can open up worlds of possibilities."

Painted Brain6 hours ago
☝️ Did you know "Play" is good - AND not only for mental wellness❓
♦️ An #endorphin-powered workplace makes teams more productive, employees more engaged, and reduces stress-related costs.
♦️10-15 minutes of #laughter burns approximately 10-40 #calories per day, which is roughly 4 pounds a year.
♦️ It’s #aerobicexercise without going to the gym. Recall the last time you worked out and how relaxed your body felt afterward. It’s a similar feeling after a good belly laugh, and it continues for almost an hour.

Painted Brain @ThePaintedBrain
3 hours ago
“Having a safe place to take shelter is a basic necessity. We must find solutions to the homelessness crisis. To do this, it is vital for our families and individuals impacted by mental illness to be part of the conversation.”
@cruzer2211
@NAMICalifornia
View on Twitter
3
6