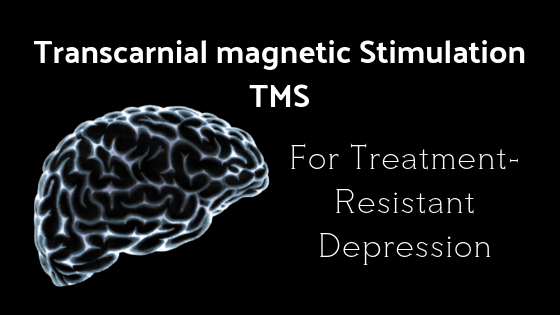 Depression is a disorder that can take over one’s life very quickly, making even normal everyday activities a strain. It can interfere with occupational responsibilities, social activities appetite, concentration, and more. Like any other illness, the severity and treatability of the disorder may vary amongst individuals. While most may respond to psychotherapy or to psychotherapy in combination with medications, some do not. For those, transcranial magnetic stimulation (TMS) may be an option.

TMS is a non-invasive procedure that involves stimulation of the nerve cells in regions of the brain responsible for mood control. The repeated magnetic pulses to the brain have been shown to decrease depression symptoms. Research has shown that those struggling with depression have decreased brain activity in related brain regions, thus, the goal of the magnetic pulse is to activate them. The procedure is performed by placing an electromagnetic coil on the scalp, where it will deliver short and intense magnetic pulses to the brain to generate an electrical current. Its position is centered above the prefrontal cortex, a region in the brain showing abnormal electrical activity in depressed patients.

Though the effect on the brain is still not entirely understood, Ananda Pandurangi, MD, a psychiatrist at the Virginia Commonwealth University School of Medicine, explains the theory behind TMS, stating: “The theory is that when this stimulation occurs in the left frontal brain, it spreads to the underlying deeper areas of the brain that are involved in the regulation of mood. When we do it over and over again, it normalizes the neuronal circuits involved in depression,”

Since the procedure became FDA approved around ten years ago, its utilization has been growing all over the country. Though many questions about the process still remain, it has shown promising results with treatment-resistant depression.

The procedure is completely painless and each session takes about 30 minutes with the patient sitting awake, upright in a chair. it is performed by a physician or a nurse and typically involves 20-30 sessions given over the span of four to six weeks. Side effects are minimal with the most commonly reported being headaches and muscle soreness. There is also a small risk of seizure, comparable to the one associated with antidepressants. Due to the expensive machines, the total cost of the treatment can come out to $6,000 to $12,000. However, it has become somewhat more accessible to people as more insurance companies have begun to cover the pricey treatment. Antidepressants and psychotherapy are far more convenient and affordable than TMS, making them the first line therapy, but TMS would serve as a great alternative option for those with difficult to treat depression.

Who is a candidate for TMS?

In order to be approved for the procedure, you must be over the age of 18, have a diagnosis of major depressive disorder, and have not gotten results from anti-depressants. Those with metal implants, history of seizures, or facial tattoos with metallic or magnetic senstiive ink are not good candidates for this procedure.

There is also speculation about expanding TMS for treatment of other disorders. For example, a study found that TMS could potentially be effective in treating vascular depression. Others hypothesize utilizing TMS in the treatment of schizophrenia, attention deficit-hyperactivity disorder, and post-traumatic stress disorder.

For more information and a video on how TMS works, please visit www.rogersbh.org.

Painted Brain3 hours ago
"One of the benefits of tech training is that it provides an outlet for meaningful engagement. The old argument that too often smartphones and Facebook becomes a crutch for real social interaction, this is entirely different for someone who is already isolated and needs to connect with people outside of his home. If you already have a good social circle of support, there is no reason to use social media in excess. For someone starved of social interaction, it can open up worlds of possibilities."

Painted Brain5 hours ago
☝️ Did you know "Play" is good - AND not only for mental wellness❓
♦️ An #endorphin-powered workplace makes teams more productive, employees more engaged, and reduces stress-related costs.
♦️10-15 minutes of #laughter burns approximately 10-40 #calories per day, which is roughly 4 pounds a year.
♦️ It’s #aerobicexercise without going to the gym. Recall the last time you worked out and how relaxed your body felt afterward. It’s a similar feeling after a good belly laugh, and it continues for almost an hour.

Painted Brain @ThePaintedBrain
2 hours ago
“Having a safe place to take shelter is a basic necessity. We must find solutions to the homelessness crisis. To do this, it is vital for our families and individuals impacted by mental illness to be part of the conversation.”
@cruzer2211
@NAMICalifornia
View on Twitter
3
6