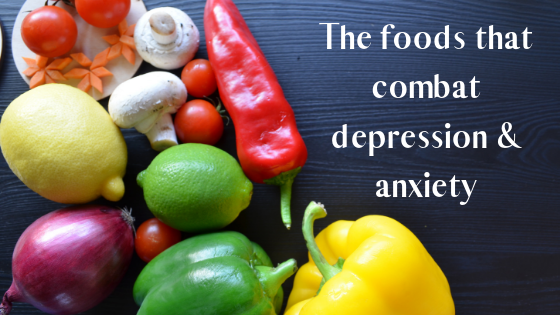 The Foods That Combat Depression and Anxiety

There is not a specific food that can cure depression and/or anxiety, per say.  However, there are certain foods and food groups one can incorporate in their diet, in order to relieve some of the most awful symptoms of both depression and anxiety.  Foods that are high in certain vitamins and minerals are essential for both the maintenance and advancement of one’s mental health. Our bodies need antioxidants in order to prevent cell damage, aging, and other harmful effects from free radicals.  Some foods that combat this are foods that are high in beta-carotene such as apricots, broccoli, cantaloupe, carrots, collards, peaches, pumpkin, spinach, sweet potato. Another vitamin that is essential for someone that is combatting depression or anxiety is vitamin C.  Fruits such as blueberries, grapefruit, kiwi, oranges, strawberries can help boost one’s vitamin C levels. Vegetables such as broccoli, peppers, tomatoes, also are good. Vitamin E is in margarine, nuts, seeds, vegetable oils, wheat germ. The body needs carbs, but as long as they are smart carbs.  Smart carbs produce a calming effect and are in many fruits and vegetables, legumes, etc. Foods high in protein can provide one with some sort of alertness and energy. Turkey, tuna, poultry, lean beef, contain tryptophan. Tryptophan produces serotonin. These foods not only provide energy, but can also clear the mind.  Low-fat cheese, fish, milk, soy products, yogurt, all contain tryptophan.

This wasn’t the first study to find a link between these vitamins and depression. Researchers aren’t sure which way the influence goes: do poor nutrient levels lead to depression, or does depression lead people to eat poorly? In either case, you can get both of these B vitamins from foods in a Mediterranean diet. Legumes, nuts, many fruits, and dark green vegetables have folate. Vitamin B12 can be found in all lean and low-fat animal products, such as fish and low-fat dairy products.  A 2010 national study found that the likelihood of having depression is higher in people with low levels of vitamin D. In another study, researchers from the University of Toronto noticed that people who had symptoms of depression, particularly those with seasonal affective disorder, tended to get better when the amount of vitamin D in their bodies went up as you’d expect it to during the spring and summer. Researchers don’t know how much vitamin D is ideal, although too much can cause problems with calcium levels and how well your kidneys work.

Studies have reported a link between low selenium and poor moods. The recommended amount for selenium is 55 micrograms a day for adults.  Evidence isn’t clear that taking supplements can help. And it’s possible to get too much selenium. So it’s probably best to focus on foods I mentioned above that are rich in vitamins and nutrients such as meats, dairy, etc.

Recently, scientists found that societies that don’t eat enough omega-3s may have higher rates of major depressive disorder. Other studies show that people who don’t often eat fish, a rich source of these fatty acids, are more likely to have depression.

Good sources of omega-3s, including alpha-linolenic acid, are:

Your Weight and Lifestyle Matter, Too

Fortunately, a nutritious diet including the foods above will help you get to and stay at a healthy weight. If you’re having a hard time, talk with your doctor. Many people who are depressed also have problems with alcohol or drugs. Not only can they interfere with your mood, sleep, and motivation, they can also reduce the effectiveness of your depression medications. Drinks and foods with caffeine can trigger anxiety and make it difficult to sleep at night. Cutting back or stopping caffeine after noon each day may help you get a better night’s sleep.

The following foods below are known to be good people that suffer anxiety.

Many studies going back to the 1960s indicate that many people who suffer from anxiety and depression have an elevated incident of folate deficiency. Asparagus is one vegetable that contains a valuable amount of this mood-boosting nutrient. One cup alone provides two-thirds of your daily recommended folate value.

Ditch the French Fries and sauté, steam, or grill some asparagus to serve as a side dish. If you tend to snack on fries, consider this substitute: dip cooked asparagus into salsa, hummus, or a bean dip.

Vitamin B6 helps the body make several neurotransmitters, including serotonin, which influences mood. “The B vitamins, including thiamine, riboflavin, and niacin, have positive effects on the nervous system. Deficiencies of these vitamins have been linked to increased anxiety in some people,” explains Godfrey. Avocados are rich in stress-relieving B vitamins and heart-healthy fat that may help to lessen anxiety.

Avocado ice cream? Yes, you heard that right. Next time you’re reaching for that pint of full-fat, calorie-laden ice-cream, whip up your own frozen avocado treat. Just blend avocado with a ripe banana, vanilla extract, almond milk, and sweetener. Freeze for a few hours and then dig in, knowing you’re boosting those B vitamins as you go!

When we’re anxious and stressed, our bodies crave vitamin C to help repair and protect our cells, and blueberries are packed full of it. Small but mighty, blueberries are bursting with antioxidants and vitamin C which have been shown to provide anxiety relief. One study examined the effects of oral vitamin C supplements on anxiety in a group of students and found that antioxidants may be useful for both the prevention and reduction of anxiety.

Reaching for sugar when hunger strikes causes the brain to work at sub-optimal level and puts you at greater risk for depressive symptoms associated with anxiety. “The sweetness from blueberries is a better option acting as a positive immune booster; added sugars throw off the healthy bacterial balance in the gut that may increase anxiety,” Godfrey says.

Ever heard of tryptophan? It’s the nutrient in turkey that puts you to sleep after Thanksgiving dinner. Okay, it’s a little more than that. Tryptophan is an amino acid that the body needs to produce the neurotransmitter serotonin, which helps regulate sleep and mood. According to the University of Michigan, tryptophan may help reduce anxious feelings.

Avoid the temptation of picking up fried chicken on your way home by prepping your meals in advance. This way you can reap the benefits of tryptophan found in turkey. Fried foods introduce unhealthy fats and counter the good from the tryptophan that may help put you at ease when anxiety is looming. “Planning a meal with turkey diced into quinoa or brown rice and some added veggies will provide a wide range of healthy nutrients and support a sound sleep,” suggests Godfrey.

Researchers have shown that magnesium may be an effective treatment for anxiety-related symptoms, as inadequate magnesium reduces the level of the neurotransmitter serotonin in the brain. Just 1 ounce of almonds (that’s about 12 nuts) ­ contains 75 mg of magnesium which is 19% of your daily recommended value. You can also find magnesium in foods such as legumes, seeds, and—everyone’s favorite­—avocado.

Consuming artery-clogging trans fats, like those found in cookies, can increase your risk of depression by as much as 48%, according to one study.4 “Snack on nuts rather than cookies to ensure you are getting healthy fats and fiber that promote gut health, rather than the sugar that interrupts good bacteria,” says Godfrey. Next time you need a crunch, reach for a handful of almonds instead of reaching for cookies. If you are in dire need of a sweet, throw in a few dark chocolate chips with the almonds.

You might be surprised to learn that fermented food—including yogurt, one you might not ordinarily think of as falling into this category—can help reduce anxiety! A link has been found between the consumption of fermented, probiotic foods and a reduction in social anxiety.5 The best yogurts—Greek, plain versions in particular—that contain “live and active cultures” are guaranteed to have 100 million probiotic cultures per gram or about 25 billion probiotic cultures in a cup. Other probiotic foods: pickles, sauerkraut, kombucha, and miso.

Food Swap: Yogurt and Cereal Instead of  Milk and Cereal

Mix up your breakfast by swapping out milk for yogurt with your cereal. Doing so may have a protective effect against social anxiety symptoms for those at a higher genetic risk.6 Symptoms of social anxiety include excessive fear of situations in which one may be judged, worry about embarrassment or humiliation, or concern about offending someone. If yogurt isn’t your thing, try incorporating sauerkraut or a pickle into your daily sandwich. Miso, a traditional Japanese seasoning, can be a substitute for parmesan in soups or noodle dishes!

Researchers at the State University of New York found that anxious symptoms are linked with a lower antioxidant state and that antioxidants can help with mood, too. Dark, leafy greens like kale, which is rich in beta-carotene and vitamin E, are needed to boost antioxidant levels and support optimal brain functioning.

If you already eat salad or add lettuce to your sandwiches, replace it with kale. To reap the benefits without the bitter taste some find displeasing, add it to an omelet, soup or smoothie.

According to another study from Ohio University, omega-3 fatty acids are particularly effective when it comes to foods that help with anxiety. You can find omega-3 fatty acids in foods like salmon, chia seeds, soybeans, and walnuts as well as cold-pressed olive oil. “Our brain requires the right dietary fats to function properly,” Godfrey says, “so you’ll want to eat enough of the beneficial fats that support a healthy brain-gut microbiome, which means replacing red meat with seafood.”

Food Swap: Salmon Instead of Steak

A juicy steak might be hard to pass up, but a diet rich in the omega-3 fatty acids found in salmon helps keep cortisol and adrenaline from spiking when you’re feeling tense. Experiment by trying out different spices and flavor combinations when cooking salmon. Start simple. Sprinkle the fish with salt, pepper and garlic, add a few sprigs of rosemary, and top with some thinly sliced lemon. Delish!

Painted Brain1 month ago
Think about it. All those times you thought: “I can’t do this.” 🙇🏽‍♂️All the times you buried your face in your hands and thought: “I’m not going to survive this…” 🤦🏻You actually did get through it! 🕺🏻💃🏻You reached down deep and found the strength, or the faith, to go on. 🌳And now it is behind you.🖼I am going to try and remember this the next time I feel overwhelmed, or hopeless.🍁I am going to recall the times I triumphed over fear and anxiety...and use that to get me through the next hurdle.🌿🍃🌾How about you?🍂

Painted Brain @ThePaintedBrain
4 hours ago
Be mindful of the gap. It can be a trigger or an inspiration!
(Image via
https://t.co/4hiFGEcvwX
( @CtrlAltRecover) https://t.co/uV2rBBXInF
View on Twitter
4
6