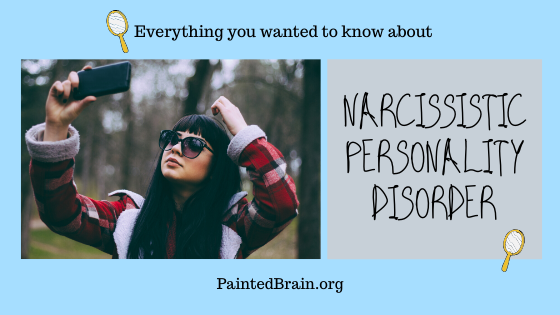 Everything You Wanted to Know About Narcissistic Personality Disorder

In the age of selfies and social media personas, the word “narcissist” seems to be one that gets thrown around quite often. It’s likely that you have found yourself thinking, “That person is such a narcissist!” But what is Narcissistic Personality Disorder (NPD)? Unlike the word “narcissist” which implies a self-absorbed and overly boastful attitude, NPD is a mental illness.

It’s important to know the difference and how to spot the warning signs of NPD.

NPD is characterized by a pervasive pattern of grandiosity, constant need of admiration, and a lack of empathy for others.

From early adulthood, the following symptoms and signs are present across contexts:

NPD is not a common disorder and can only be found in 0.5% and 1.0% of the population, affecting more men than women.

Beneath the highly secure and confident exterior, they are actually struggling with severe insecurity and feelings of shame. The grandeur facade is only there to help them cope with negative feelings towards themselves. These individuals are highly competitive and very easily threatened by the success of others. They cannot handle any criticism and will often either shut down or get angry in response. Consequently, they cannot take accountability for their actions.

Regardless of how many problems their dysfunctional behaviors and attitude will cause them, they remain resistant to change and would instead turn the blame onto others. For this reason, they rarely seek out treatment. However, if they can seek treatment and actually follow through, it can significantly improve their quality of life.

Inherently humans can be selfish and self-centered at times, craving admiration and praise; however, NPD symptoms are highly destructive to both the person with the disorder and those around them. Their extreme sense of self-importance and complete lack of regard for others causes great damage to their relationships.

Though at first individuals with NPD can seem charming and attractive, things can quickly take a toxic turn with their patronizing and demanding behaviors. Those with NPD will often monopolize conversations and belittle those that they perceive as inferior. They are also incapable of recognizing or respecting feelings and needs of others, making their relationships tumultuous and short-lived. They have a tendency to manipulate others, usually without any remorse. Other people are only used as a means to fulfill their needs and to act as admirers.

Though the causes of NPD remain widely unknown, there is speculation that the disorder may be linked to environmental factors; early childhood experiences with parents that were either excessively adoring or excessively critical. Genetics and neurobiology are also thought to play a role in the development of this disorder.

It is important to note that those with Narcissistic Personality Disorder are not bad people, but rather individuals that are struggling with a severely complex disorder, one that causes them great distress. If you think you might be dealing with someone with this disorder, remember that their treatment of you is more of a reflection of their own insecurities than about you. Set healthy boundaries and stick to them. Make sure to have other meaningful relationships with those that give you an honest reflection of yourself.

Painted Brain @ThePaintedBrain
1 hour ago
Stand tall and strong when it most matters. Remember your humanity.
#strength is #kindness
via :
@Emilio_INC https://t.co/oJtGgjFeIL
View on Twitter
4
7

Painted Brain @ThePaintedBrain
7 hours ago
"Talking about #mentalhealth won’t help, unless it extends to the talking about the reasons why so many experience mental ill health, and what collective action we can take to address those drivers."
@NEF @mentalhealthfdn
https://t.co/Z9sbeXsvKt
View on Twitter
2
4