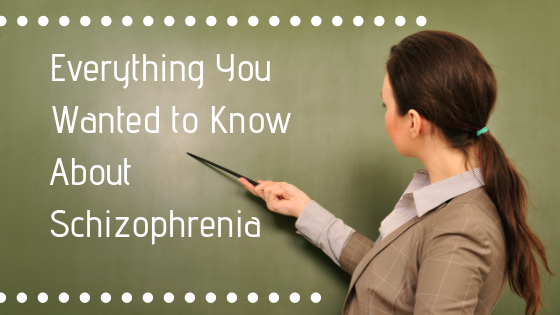 Everything You Wanted To Know About Schizophrenia

Schizophrenia is a chronic and complex mental illness that impacts the way one feels, behaves, and interprets reality. It’s characterized by delusions, hallucinations, and disorganized thinking, which can severely impact daily functioning. If treatment is sought early on, it can help with symptom management and improve the long-term prognosis.

The average age of onset is between the late teen years to early 20’s in men and late ’20s in women. Though it affects men and women equally, women tend to have higher functioning levels because of the delayed onset.

Schizophrenia is characterized by positive, negative, and cognitive symptoms:

The disruptions in thought and affect severely impact the quality of life of those living with schizophrenia. They interfere with a person’s ability to maintain relationships and properly engage in social interactions. This often leads to social withdrawal and feelings of isolation despite how badly one may crave connection with others. Symptoms also interfere with occupations and make it difficult to hold a job. Those with schizophrenia often have a comorbid substance use disorder which exasperates symptoms.

Currently, science believes there are several risk factors that contribute to the development of schizophrenia. Genetics, brain chemistry, and environmental factors are all thought to play a role.

The goal of treatment is to help the individuals with symptom management so that they can reintegrate back into society and live the best quality life possible given their disorder. The gold standard in treating schizophrenia includes a combination of antipsychotic medication, psychotherapy, and other adjunctive resources. It’s crucial to maintain medication compliance to prevent further psychotic episodes and consequent hospitalizations. Unfortunately, schizophrenic patients are known for non-adherence and poor compliance, resulting in high relapse rates and a less than hopeful prognosis. One study reported that nonadherence rates in schizophrenia range from 37% to 74%. Therefore, it is crucial to provide psychoeducation about the importance of medication compliance and risks associated with relapse.

Those suffering from schizophrenia benefit from personal therapy involving cognitive-behavioral therapy (CBT) as well as daily involvement in groups at outpatient facilities. Additionally, the involvement of families in the treatment process greatly improves outcomes for patients as well as providing support for the families.

Though schizophrenia is a very severe, life-long disease, people can go on to lead happy and healthy lives if they seek and adhere to treatment.